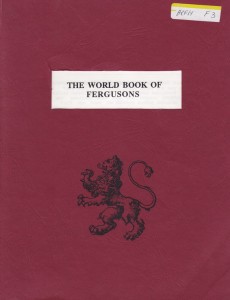 SECTION I
THE GREAT MIGRATIONS OF MAN: EARLY ORIGINS, SETTLEMENT AND DEVELOPMENT
You’ll learn about the early settlement and the mass migrations to many lands. You’ll discover the story of emigration and the migratory path connected to your present homeland.

SECTION II
HOW NAMES ORIGINATED AND WHAT THE FERGUSON NAME MEANS
You’ll learn facts about family names you may not have realized before. We begin with a broad background on names and eventually learn what your surname specifically means. You’ll also learn the different spelling variations for your surname.

SECTION III
HOW EARLY COATS OF ARMS WERE GRANTED
Family crests and Coats of Arms have stirred a romance with the past from generation to generation. Included in this informative chapter is a step-by-step explanation of heraldry plus a translation and reproduction of a Coat of Arms granted to an early Ferguson.

SECTION IV
HOW TO DISCOVER YOUR ANCESTORS
Genealogy has become a favorite family hobby. Here’s how you can begin your genealogical search. You’ll learn where to write for official documents worldwide. Information and resources to aid you in tracing your family tree are provided.

SECTION V
THE FERGUSON INTERNATIONAL REGISTRY
After searching through over 150 million international records, you will find provided the most complete international Registry of households sharing your name around the world. You’ll discover specific statistical information about the Ferguson population in Australia, Canada, England, Ireland, New Zealand, Northern Ireland, Scotland, the United States of America and Wales. If you find there are no Ferguson households listed for a particular country, this valuable knowledge will save enormous time when you conduct your family research.

How You Can Use the Ferguson 1990 International Registry to Aid You In Tracing Your Family Tree, Or In Locating Lost Family Members

The following registry can provide you with an invaluable genealogical research aid. You might begin by writing to Ferguson individuals in the county, state, province, or territory where your own family heritage research leads you. Frequently you’ll learn a great deal from the responses you’1l receive. The Ferguson International Registry should get you started pursuing which of the 69,193 Ferguson families could be related to you in the countries searched. It may even lead you to discover a missing or lost family member.

Certain surnames have no families or individuals listed in one or more of the countries searched. This may be surprising to you; however, this information is quite valuable since it tells you that your search needn’t be pursued ,in that country. We’re pleased that we can provide you with the following Ferguson International Registry and hope you find it informative, useful, and entertaining. When you wish to find a specific household in the 1990 Ferguson International Registry, you‘ll want to look in postal code or zip code sequence, as the registry is formatted by postal area.

APPENDIX A
EARLY FERGUSON IMMIGRANTS TO NORTH AMERICA
This invaluable listing of early Ferguson immigrants gives the persons name, port of entry, where they settled and the reference book where their name was found.