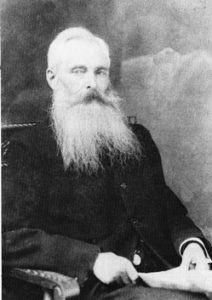 Alexander Barnet, one of Renfrew’s most prominent citizens for close on to half a century, now sleeps his last sleep on the hillside overlooking the valley wherein was reared for most that period of time is earthly home. His end came suddenly on Friday last during the noon hour. Following his usual custom of late years he had gone south for a time during the severe weather, but had returned on some business matters with one intention of later on again seeking the milder climate. Although he took precautions, while in the open air, in the somewhat severe weather of last week – he was out on the coldest day of all, Wednesday – he caught cold. This, though apparently nothing serious at first, on Friday rapidly developed into pneumonia; and within two hours of the time he was known to be dangerously ill he had peacefully slept away. The shock and grief to the family of this sudden passing of its kindly and devoted head was great; and throughout the town there is a deep feeling of sympathy for those bereaved so unexpectedly.

From the newspaper Reference Book of Canada is taken the following biographical sketch of Mr. Barnet written some fifteen years ago:
“To the industry and enterprise of the lumbermen of Canada much of our present prosperity is due. The fields of Canadian endeavor have widened and the opportunities for capital and labor have multiplied since the great timber merchants exploited to any great extent the wealth of our forest lands. The plains of the Canadian West were then merely the home of the trader, the Indian and the bison. Our manufactories were then in their infancy, and our mineral wealth existed in the bowels of the earth and in the vague and general reports of explorers and engineers. To the lumbermen of Canada, the present generation owes much. They were the pioneers in the development of Canada’s illimitable resources. Among those sturdy, self-reliant, resourceful men who during the latter half of the nineteenth century practically hewed their way to fortune was Alexander Barnet of Renfrew, Ontario. Born in the County of Renfrew on the 25th of February, 1840, when the present prosperous town of Renfrew was but a village in “the back woods”, he received his education at the Country school, and as a boy of fifteen entered upon the arduous calling of a lumberman, which he followed in all the many phases of that hardy many-sided life until he was twenty, adding to the primary education received at the country school-house by attending night school whenever the opportunity offered.

In the winter of 1860-61 having a good pair of horses and $300 saved from the small wages of the working lumberman of those days, he started business on his own account and with variable success in those days of uncertainty in the lumber trade, he continued his operations on the Madawaska and its tributaries. In 1865, in conjunction with William Mackay and William Bannerman, under the name of Barnet, Bannerman & Co. they commenced lumbering on the Bonnechere on a larger scale. Buying out the interests of Mr. Bannerman in 1876, William Mackay and Alexander Barnet continued on in business, under the name of Barnet and Mackay until 1884. In 1869 Mr. Barnet formed another partnership with Thos. Mackie, M.P. of Pembroke, and they did business together for nineteen years during which time they manufactured timber principally for the foreign trade. An idea of the development and dimensions of their business may be had from the fact that, beginning to manufacture for export in 1866, and continuing until 1900 they delivered in Quebec for the English market 400,000 to 500,.000 cubic feet annually. Few men have been so long personally and actively identified with the lumbering interests of Canada as Mr. Barnet, he having operated on nearly all the waters tributary to the Ottawa river, above the city of Ottawa, and now, after nearly half a century’s devotion to his business is as assiduous and energetic in the conduct of the business (and still retaining over 350 square miles of timber limits on the Ottawa tributaries and in British Columbia) that has grown up through his efforts and ability.

Of north of Ireland descent his parents having come to Canada in 1836, he is a Presbyterian in religion.”

While these are the broad outlines of the life of our deceased townsman, there are some lights that may be painted in – wherein he more closely touched the life of this community. Though of late years somewhat frail of health, and with strength no more than sufficient to carry those responsibilities of his large interests that it seemed necessary he should himself assume even though much of the detail was deputed to others – he was not known as active in local affairs. But as a younger man he had borne his share. He had served as a member of the village council for several years, and as director and president of the Agricultural Society; and in the councils of the Conservative party, locally and in a wider sphere, he stood high. Probably many now here do not know, and others may have forgotten, an incident in which his outstanding influence in his party helped this community decidedly. That was in the relief to Renfrew and two neighboring townships from a railway bonus; and though in the end that came from the other political party it did come only because of a letter written to Mr. Barnet and the late John Ferguson by Sir John A. MacDonald when premier. In other ways, too, Mr. Barnet helped the town. While with his quiet humour he sometimes remarked that when he ventured outside the lumber trade – which he knew so thoroughly – he frequently burned his fingers financially. He yet helped many of Renfrew’s business men when they needed financial help, and to his kindly feeling for and helping hand held out to the young business man whom he thought showed capacity, or was worthy of his confidence, many men who have since advanced to considerable standing were in their early days indebted. In the promotion of town industries, he was ready to assist, though generally on the wise basis that the promoter must have something of his own to risk also; for without this foundation the business, no matter how well intentioned, was apt to be a failure. Similar sound common sense guided him in his judgment of other affairs and of the method by which it was wise to help. A man of reserve in manner, he did not make friends quickly; but there is universal testimony that the nearer one came to Alexander Barnet, the more closely one knew him, the warmer grew the liking and admiration for one man.

In kindly recognition of Mr. Barnet’s close intimacy in social and business life with many people of that faith; a somewhat unusual mark of respect was accorded him – in the tolling of the Roman Catholic church bell at the time the funeral cortege was leaving the family residence.

The funeral services were conducted by Rev. E.B. Horne, assisted by Rev. Prof. Wallace of Queen’s University – of which institution of learning Mr. Barnet had been one of the liberal friends. The services at the grave were taken by Rev. Prof. Wallace; Rev. Mr. Horne not being well enough to venture on that duty in the open air, but as Mr. Barnet’s minister he delivered the address in the house – referring sympathetically to Mr. Barnet’s life as revealed to him in his few years of residence here, as a forward-looking man, practicing patience and self-denial, a man of essential piety, not only that he was faithful in church attendance, but in that he was always anxious to do the right thing and studied what that right thing was, and was sympathetic and generous in ways that were often not known, but were learned of only by accident.

The funeral notice had borne the request “Please omit flowers” and while it was observed to some extent there were some from the family and immediate friends some beautiful floral memorials as well as from institutions with which Mr. Barnet had been connected.

The 240th Battalion, in recognition of the many kindnesses its officers and men had received from Captain T.F. Barnet, were represented in these floral memorials by the “Last Post” a comet in flowers, and also by sending a detachment of men in uniform to take a place in the funeral procession – some 200 men under command of Major Fitton, and with piper and
drummers; the pipes playing “The Last Lament” as “earth to earth and ashes to ashes” the grave was being filled after the commitment prayer by Rev. Prof. Wallace.

By the merest chance all of the family except Mrs. Code were at home at the time Mr. Barnet was taken ill; Mrs. McAllister having come east a few days previously, and Mrs. Carswell also having been in town assisting her sister Miss Grace, in some patriotic work.

Mr. Barnet was in his 77th year, and in February would have been 77. His golden wedding anniversary was also approaching, for it was in 1867 that he was married to Miss Jane Green, who survives with two sons and four daughters – Mrs. C.B. McAllister of New Westminster B.C.; Mrs. J.H. Carswell of Ottawa; Mrs. Louise Code (at present in London helping in Canadian Hospitals work) and Miss Grace at home. The sons are J. George and Capt. Thomas F. Four sons predeceased the father – William, Alexander, Harold and James E.H.