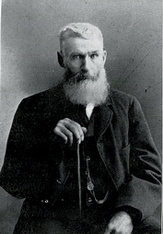 With the passing of David Airth, Sr., on Sunday morning, there was removed from this earthly scene one who can truly be described as one of the landmarks of Renfrew. A member of the first family to settle here permanently – David about eight years of age at that time – and one who had practically spent all his days within its limits, he, more than any other except his single remaining brother, Henry, knew the history of the place, and of its gradual growth from a forest wild into a modem town. And in his early days, his days of prime, few did more than David Airth to subdue the wilds and to perform the duties of pioneer life. He was a strong man, and wiry, delighting in deeds of strength and endurance; an athlete, and on in whom the life of athletic sport never died out. Although in his 83rd year, nearly every day this winter he had walked into town, to enjoy the afternoon in watching or participating in the game of curling, a game of which he had always been a devoted admirer. Nor was it in sport alone that he took delight. He was a reader, and a great admirer of Scotch verse of Burns particularly. Indeed, he had a touch of poetry himself; and while some of what came from his pen would not stand the criticism of the learned, at other times there breathed through his lines the spirit of the true poet.

Partly from lack of inclination, possibly; partly through his location, he had not taken any great part in public work; but in the distant past served as a village councilor. He was an ardent Liberal; and a most faithful member and attendant on the services of St Andrew’s church, being twice at the church the last Sabbath of his life. He had had one or two severe attacks of illness of late years, but had rallied. Of late he had seemed pretty well; and arrangements had been made to celebrate his 83rd birthday on Saturday the 30th, by a family gathering. But this was not to be. On Thursday the 21st, it became known in town that he had again been taken seriously ill; and the end came at nine o’clock on Sunday morning, after a few hours suffering.

The funeral services on Tuesday afternoon were conducted by Rev. Mr. Hay, assisted by Rev. Jas. A. K. Walker, and Rev. Dr. Campbell. Deceased was a twin brother of the late Robert Airth, second sons and fourth children of the late Sergt. Henry Airth. Of the ten brothers and sisters, only Henry (the eldest son) and Mary (Mrs. Robert McLaren) the youngest daughter now remain. Some sixty years ago, Mr. Airth married Margaret Beauchamp (the daughter of another of the pioneer settlers) who survive him. Of their four children, only one son, Robert, and one daughter (Mrs. Robert Stewart) preceded the father to the grave. Two daughters Mrs. Malcolm McDermid, of Horton and Mrs. Henry Jamieson of Red Deer Alberta, survive. The funeral cortege was an exceptionally long one, and of the large number who witnessed the last rites in the cemetery, it was remarked that probably over one-half were relatives of the deceased. Among the mourners were great grandchildren. And among the handsome floral memorials was a beautiful anchor from the Renfrew Curling Club.