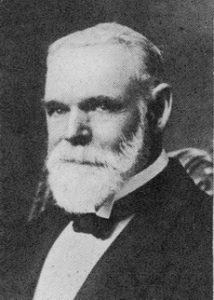 Congratulations are due Mr. David Barr Sr. of Renfrew. Today – Friday, August 7th, is the 85th anniversary of his birth. He was born in Horton township, on the outskirts of the town, the fourth son of David Barr and his wife, Agnes Airth. He attended school on the 3rd concession line, between his father’s lot in the 2nd concession and No 8 in the 3rd, the teacher being Duncan Ferguson. School days over, he followed farming until 25 years of age, during which time he did more or less work as a teamster in lumber camps principally on the south branch of the Petawawa. First work of the kind which he did was in 1857, ten years before Confederation.

Next year Mr. Barr drew supplies for Xavier Plaunt, who had removed from Renfrew to Opeongo.

In the year 1862, while still farming and teaming, Mr. Barr went to Perth as a juryman, the counties of Renfrew and Lanark being then united. He traveled on horseback with Duncan McIntyre, afterward his father-in-law, for in 1876 David Barr and Mary McIntyre became husband and wife.

In 1865 Mr. Barr was engaged as clerk in the general store of his uncle William Airth, spending five years at the job. He then took a few months’ holidays during which time he drove a load of oats up the Opeongo Line to Victoria Lake, where John R. Booth now has headquarters, and a week later went upon a like mission to Big Opeongo Lake, one of the show places of Algonquin Park.

In April, 1870 Mr. Barr bought a 4 horse livery and ran it for one month, one of his first commissions being the taking to Sand Point, then a railway terminal point, of two loads of men who had engaged to go out with the Fort Garry expedition when there was trouble in the West. On June 1st of the same year Mr. Barr entered into partnership with the late A.A. Wright, then beginning an alliance in business which lasted for 18 years. Three years later he and a nephew, Mr. D.B. McLaren, formed a partnership, which continued until 1901, and they ran a general store on the other side of the Bonnechere, also one at the comer of Raglan and Church Streets.

Mr. Barr acted as postmaster from 1904 to 1908. The very substantial residence in which he lives was built in 1892. Though always a busy man Mr. Barr found time for public service. Before Renfrew became a town he served as a Village Councillor in 1882,’83,’84,’88 and ’89. He was for two years a member of the Board of Education. From 1903 to 1910 he was president of the
Agricultural Society, after having served as long as vice-president. He has been an honorary president of the society for several years.

He has traveled much. Six times he has seen the Canadian West, beginning with a trip to Manitoba in 1882. On one of these trips he went down the coast to California, visiting Salt Lake City and other points of interest on the way back. He has spent nine seasons at Old Orchard Beach. Several times he has been across the Atlantic, his first trans-Atlantic trip being in 1874. In 1888 his family accompanied him upon a trip to the Old Country. Relatives of the Barr’s and the McIntyres were looked up on the banks of the Clyde. In the year 1900 a period of three months was spent on the island of Jamaica.

At present Mr. Barr is compiling a family record, dating from his grandparent’s time, with the intention of issuing it in pamphlet form. His mind is clear, his vision good, and but for a slight defect of hearing he is equal to what most men are at three score and ten. He delights to speak of past events in Renfrew and district, and when recalling days that are gone mentions a building in rear of The Mercury’s office as Renfrew’s oldest-one once occupied by William Dickson as a shoe shop and residence and in the early days standing on the present Mercury site.

Mr. David Barr Sr., of Renfrew a familiar figure in town and district for a long term of years is now no more. He passed away at 5:45 o’clock at his home on Horton Street on Sunday morning, after having been more or less ill since the first of September last. In October he suffered from pneumonia and apparently made a good recovery, but his system had been weakened by the ailment and complications developed. For about a fortnight before the end came he was obliged to remain in bed. Though ranking as a “shut in” since the early fall, and compelled to miss both the Renfrew Fair and the Federal election campaign he kept fully informed of all passing events through reading. His mind was clear until almost the last. Mr. Barr was accustomed to memorize favourite literature, and on the Sunday before his death as his physician entered his room he recalled verses from Addison’s well-known hymn beginning “When all Thy Mercies, O My God, My rising soul surveys”. This hymn formed one of those used at the funeral services on Tuesday afternoon which services were conducted by Rev. Messrs. Rollins and Glassford. The attendance at the funeral was large, and there was an exceptionally numerous representation of the Masonic order, of which society the deceased had been for over half a century a member and to which he served as D.D.G.M. in the 1889-90 period besides having been three times W.M. of his lodge. Leading in the Masonic service at the cemetery were Dr. Reeves of Eganville D.D.G.M. and Mr. John Conley of Renfrew. Pall-bearers were three nephews David Barr Jr. of Horton, Harry Barr and Selby Barr of Bromley, and three cousins John B McLaren, H.J. Airth and David Muirhead. Many floral tributes were received both from individuals and organizations. There were wreaths from the Blue Lodge and Chapter of the A.F.& A.M., a pillow from the Agricultural Society, A wreath from the Renfrew Curling Club, and a wreath from the Union Lumber Co. of Toronto, Chief mourners in the cortege were John Barr of Bromley, a brother D.B. McLaren of Renfrew and Duncan McLaren of Toronto nephews. The late David Barr survived his wife Mary McIntyre by sixteen years. Surviving him are three daughters, Mrs. J.D. Gordon of The Pas, Manitoba, Miss Catherine Barr and Miss Christine Barr of Renfrew, a sister in North Dakota, Mrs. C.J. Jackson; a brother in Nebraska James Barr; two brothers in Bromley, Henry and John, Henry’s state of health not permitting him to attend the funeral on Tuesday. Mrs. Gordon one of the daughters, had been down since October. Mr. Gordon coming down at the same time but returning about a fortnight before Mr. Barr’s demise.

The life ending on Sunday morning last was one which began on a farm in Horton Township about a mile from the place of death, on August 7, 1840. David Barr was the 4th son of David Barr and his wife Agnes Airth. He followed farming till 25 years of age, then took a clerkship in a Renfrew store and next engaged in the livery business. ln 1870 the firm of Barr and Wright, general merchants was formed, the partnership continuing until 1888. This firm in 1881 erected a large brick block which was destroyed by fire in 1899. In 1891 Mr. Barr again embarked in business with his nephew, Mr. D.B. McLaren, as partner and a general store was conducted first in the Hincks section and later at the corner of Raglan and Church streets. After a few years Mr. McLaren returned to farming and Mr. Barr went into retirement so continuing to the end, except from 1904 to 1908 when he acted as postmaster. On one occasion during the years that South Renfrew sent only Conservatives to the House of Commons, Mr. Barr was Liberal standard bearer in an election campaign. He was one of the most traveled men in Renfrew having crossed the Atlantic a number of times and paid different visits to the Canadian West; he spent several seasons at Old Orchard Beach and sojourned on one occasion for three months on the island of Jamaica. He long held membership in the curling club and it is recalled that in his younger days he was an enthusiastic member of the volunteer fire brigade. In religion he was a Presbyterian, in politics a Liberal, by nature and upbringing a gentleman. His daughters mourn the passing of one of the best fathers, the community loses one of its oldest and most respected citizens.