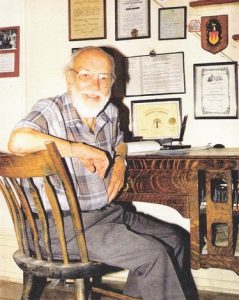 Longtime Renfrew Mercury columnist, Harry Hinchley has decided to give his pen a rest. He has researched and written almost 750 weekly “From the old tiles” columns in the past 14 years. As well, he has done a lion’s share of research and written countless stories on Renfrew’s history from noteworthy people to landmark buildings.

Overall, Harry has had a valued association with the Renfrew Mercury and its editors for approximately 25 years. His weekly columns will run for a few more weeks. “It’s been a pleasure,”
Harry said recently in his new surroundings at Quail Creek Retirement Centre.

His weekly column is widely read and has been a source of pleasure for many readers too. At the age of 91 years, Harry has retired. He was the first person to move into Renfrew’s new retirement complex and, as the only resident for a few weeks, certainly received the royal treatment from administrator Judy Walsh and her staff.

The treatment and services are still the same, although Harry is no longer alone after a flurry of new admissions since late September. He is helping Judy with the first edition of Quail Creek’s
monthly newsletter that will contain profiles of residents, coming events and interesting news items.

Harry enjoys the retirement centre because it allows him the freedom to come and go as he pleases, yet provides security and medical assistance should the need arise. Visits from his family and
friends are frequent and he has given the unit his personal touch with a display of favourite photos and rocking chair, brought from home, and his own telephone.

He has been a widower for quite a few years now but keeps in close contact with his son Jim, a resident of Kanata, and his two grandsons who are going to college.

Some days he walks the entire length of the long corridor in his wing.

Transplanted Renfrewite
Although he probably knows as much, or more, about the history of the town than any other living person, Harry is not a native-born Renfrewite.

He was born in Huron County in western Ontario and came here to work, and was later appointed manager, at the United Farmers Co-operative Creamery, the building now housing Renfrew Wholesale. Eighteen years later he became his own boss in a propane business.

Relaxing in his rocking chair a few weeks ago, Harry recalled he has always been interested in history but writing and music were also favorite pastimes.

Harry played the snare drum in the Renfrew Citizens Band in 1932 under the direction of bandmaster W.E. Downs.

However, of all his accomplishments, writing for this newspaper has brought him the most satisfaction. In doing research for his column, Harry has built up a tremendous library of thousands of cards, all systematically filed, recording interesting information on prominent
citizens and events in the town’s history.

If there is a need for any historical information, there’s a good chance it can be found in Harry’s cards. He plans to offer his card system to Fred Runge, owner and general manager of the
Runge Newspaper Group. Eventually, the files will likely find a home in the Renfrew Archives.

“I am very proud of being associated with the Renfrew Mercury for 25 years.
Newspaper writing is a distinguished calling,” Harry notes.

Indeed, Harry was thorough in his research to make sure his historical facts were correct and felt inaccuracies had no place in his columns and stories.

“I would like to be remembered as a newspaper man and a writer,” Harry states.

A grand old man
From the Renfrew Mercury

Renfrew’s lost one of its greatest citizens last week when former Renfrew Mercury columnist Harry Hinchley passed away. We think of our heritage as both past, present and future and Harry qualifies in all three, making-him a true historian

He knew as much or more of Renfrew’s history than anyone I know. When in doubt about a date or time you had only to call Harry. He had a tremendous library of cards, recording information on prominent citizens and events in the town’s history. He was, even in retirement, always jotting down some piece of history to preserve for future generation.

We at the Mercury office enjoyed Harry’s visits when he came to write his weekly column. He was a methodical man who loved his history and was proud of the papers and information he collected.
As well as history concerning people and places he also spent many years involved in researching historical buildings.