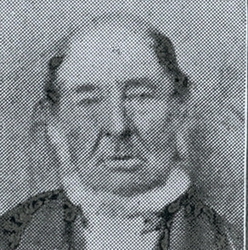 It is our painful duty to announce the almost sudden demise of our old and esteemed friend, Mr. Bellerby, which took place about 9 o’clock, on Tuesday morning. On Saturday last, he was in the village as usual, and apparently in as vigorous a state of health as could be expected in a man of his advanced years, and in consideration of the fact that his spirits had been till within a day or two before depressed by the illness of Mrs. Bellerby, whose condition had been such as to cause much anxiety to himself, and her friends. But on that day he as her health was improving, he was recovering his ordinary cheerful mood. He spoke of feeling wonderfully well and retired to rest without any indication of his approaching illness. In the course of the night, however, he was seized by an epileptic fit, followed almost immediately by paralysis. Dr. Mann was at once summoned, and was promptly in attendance, but Mr. Bellerby recovered only partial consciousness and never power of speech, and passed away without any struggle. It must be consoling to his friends, to reflect, that he had long recognized that he had nearly reached his allotted span of life, and from his strong faith as a Christian, was probably better prepared than most of them for the final call, whenever and however it might come. He was, in the old country, one of the earliest advocates of the Sunday School movement. Not so widely spread the deceased was a native of the city of York, and for nearly thirty years he was editor and publisher of the Yorkshire Gazette, and for several years of the Lincolnshire Chronicle. In the city of York he served for a term as city sheriff, and for many years was a respected member of the corporation of that city.

He afterwards removed to Canada, and settled in Renfrew in 1858, where for many years he took a prominent part in public affairs. In the office of clerk of the municipality, he found congenial occupation for his leisure hours, and up to the time of his sudden attack, was actively employed in discharging it duties. Few men, at his advanced age of 80 years, were capable of undertaking so efficiently the labor involved.

The funeral took place on Thursday afternoon, the 8th inst. The remains being followed to the grave by Reeve and Council, the resident clergy and the Rev. W. Raney (Carleton Place) and all the old and leading residents of the village.