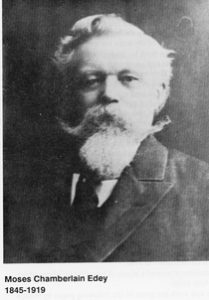 The death of Mr. Moses C. Edey of Ottawa, on Saturday last, removed an architect who in years gone by was somewhat known in Renfrew, for he designed the Barnet block, the Mackay store buildings, the John Mackay residence, and Mr. Emmerson Reid’s residence at Portage du Fort.

Mr. Edey was born in Wyman Que. in 1844 and through his mother – before her marriage Miss Mary Wyman – he was a relative of Mr. Orange Wright of Renfrew, who with his son, Mr. E.A Wright went down to the funeral on Monday. Services were conducted by Rev. Mr. Nicol, Presbyterian , and interment was made in Beechwood cemetery.

Soon after Renfrew was incorporated as a town in 1895 it began to lose its rough character in favour of a more sophisticated appearance. It was during this period that many of Renfrew’s prominent citizens engaged architects to create a more progressive look for the town. One of the most popular architects was Moses Chamberlain Edey who was well known in Ottawa for his building designs which had a flair for the unusual.

Edey made a significant contribution to Renfrew’s character, particularly in the downtown core where he was the architect for three prominent office building blocks which are still in use today. Edey’s penchant for detail is apparent in these buildings in the huge windows with fanlights, pilasters, plinths, pediments, heavily-bracketed cornice plus floral-patterned and striated keystone.

Moses Edey’s grandfather’s family came to settle in Aylmer, Quebec in 1806, leaving Vermont and its anti-Loyalist sentiments behind. The family was attracted to the area by glowing reports from Philemon Wright, a business man from Woburn, Massachusetts, who founded a settlement in 1800 along the Ottawa River near the Chaudiere Falls.

Moses C. Edey was born to Richard and Mary (Wyman) Edey in 1845. His father was a farmer and lumberman. In his youth, Edey spent most of his free time working with a wood lathe he had made, as well as with saws, augers and chisels. His bedroom was so full of easels and drawing boards that his brother, Joseph, with whom he shared the room, complained there was scarcely enough space for a bed.

Edey’s first job, in 1861, was in a wood related trade as an assistant carriage maker in Arnprior, Ontario. Edey worked one year in Arnprior and two years at an Ottawa carriage making company.

In 1865 Edey decided to venture to Toronto to study architecture with William-Tutin Thomas (1828 to 1892) who is known to have designed various Ottawa buildings including St. Andrew’s Presbyterian Church and the Ottawa Collegiate Institute, the latter in association with Ottawa architect, W. Chesterton (1845 – 1931).

It was not long, however, before Edey moved on, the following year he travelled to Moravia, New York where he worked for the architect Z.D. Stearns. He also spent some time with the Casey Tool Company in Auburn, New York.

In 1872 he was back in Ottawa where he married Mary Whillans. To support his family, Edey formed a woodworking company with A. Sparks. During their ten-year partnership the two men crafted woodwork in many Ottawa homes including the Bate residence. It is most likely during this period that Edey built the furniture which still belongs to his descendants.

Edey also attended the Ottawa School of Arts and Science during the 1880s. In addition to the prizes for his work at the school, Edey also won many awards at the Ottawa exhibition. These prizes and awards include the following:

1875 – Second prize from the Ottawa Exhibition for his drawings, architectural geometry and perspective views.
1885 – A silver medallion and bar (A-179 Bytown Museum Collection) from the Canadian Manufacturing Association for the design of a wrought iron fence.
1886 – A silver medal from the Ottawa School of Arts and Science for the successful completion of freehand drawing, practical geometry and building construction.
1887 – A Provincial Government certificate for model drawing and industrial design at the school.
1887 – A diploma from the Ottawa exhibition for the design and plan of working-class dwellings in cities, including the cost of different materials.
1887 – A diploma from the Colonial Exhibition, London, England. 1887 – A medal from the Education Department of the Ontario Government for his successful work at the Ottawa School of Arts and Science. Two medals were awarded to M.C. Edey and R. W. Crouch for being the most successful students in Ontario’s art schools.
1887 – A certificate from the Province of Ontario for model drawing, industrial design and highly commended penmanship, as well as modelling in plaster and clay.
1887 – A diploma from the Ottawa exhibition for a wrought iron fence and gates.
1888 – A prize from the Ottawa exhibition for an iron panel.

In 1892 Edey was honored by being included in the book: “Prominent Men in Canada, a Collection of Persons Distinguished in Professional and Political Life and in the Commerce and Industry of Canada”. It is likely that this recognition encouraged Edey to engage in the architectural profession. Shortly afterward Edey’s buildings began to appear throughout Ottawa and the Valley. The following are examples of his work:

Edey’s most famous Ottawa buildings are the Aberdeen Pavilion (1898-9), commonly known as the Cow Palace, at Lansdowne Park and the Lindsay Department Store (1904) or Daly Building. Recently groups concerned with preserving architecturally significant structures have fought to keep these buildings intact. The Aberdeen Pavilion was the first Ottawa building to utilize
long span steel arches in construction while the Daly Building is Canada’s best example of the Chicago style department store.

Edey’s structures brighten many Ottawa Valley towns and cities. They are distinctive for many pleasing features including elegant fanlights, fancy cornices and intricate brick arrangements. These buildings, which housed the offices of prominent citizens, merchants as well as various social organizations and businesses, survive today to provide a unique insight into the Ottawa Valley of the late 19th and early 20th centuries.